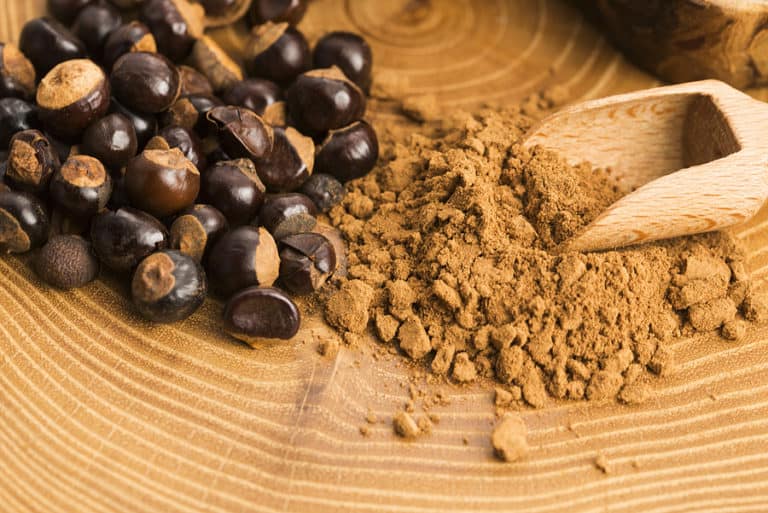 Guarana ( Paullinia cupana ) is obtained from the seeds of the liana plant of the same name. It belongs to the so-called soap tree family and originates from the Amazon region.

The red fruits contain seeds inside, also called nuts. These are not only rich in fats, proteins and starch, but are also characterized by their high caffeine content. Guarana beans contain about twice as much caffeine as coffee beans (3.6-5.8% caffeine compared to 1-2% in coffee beans)

In Germany, guarana is mainly known in the form of powder as a capsule, in energy drinks or even in tea.

This delayed and long-term effect occurs because the caffeine in the guarana seeds is bound to tannins (tannins) is bound. Before the caffeine can be released and fully develop its effect, these substances must first be broken down.

The indicated nutritional values refer to 100 grams of guarana powder:

In addition to the high concentration of caffeine the following substances, among others, are found in the guaraná seed:

Guarana is popular not only because of the caffeine content it contains. As a traditional medicine, guarana has been used to treat headaches, dysmernorrhea, and as a stimulant. Guarana is also said to have antioxidant and antidepressant effects. However, this still needs to be verified by further research.

Many studies on guarana have found that herb improves, among other things. decision making as well as memory and attention processing.

These effects and benefits continue to be attributed to the liana plant:

Antioxidants are responsible for neutralizing free radicals in the body. If there are not enough antioxidant agents available, then symptoms of fatigue occur more quickly during intense exercise. Muscles and joints can suffer more from physical stress.

Special importance of guarana for athletes

Energy booster without carbohydrates? This is guarana! Because as described, guarana contains significantly more caffeine than coffee beans – and hardly any carbohydrates.

However, it is not only the amount of caffeine that is decisive. Another advantage over other wakefulness stimulants is that the caffeine contained in guarana is released slowly in the body. This slow and long-lasting process makes the caffeine have a more lasting effect. An abrupt drop in performance as known from other caffeinated products is therefore absent.

Guarana, as a natural stimulant, can consequently counteract fatigue and provide new energy. It is also able to prevent a sudden drop in energy (during physical exertion).

Another important aspect, especially for athletes, is the good tolerance attributed to Guarana. However, this has not yet been precisely researched and, moreover, should be tested individually in each case.

But in general, guarana is considered gentler on the stomach and better for the digestive tract than traditional coffee beans due to the slow and relaxed processing method. Therefore, guarana is used as an alternative, especially in special foods and natural sports nutrition.

One of the exercises involved a 40-minute run on a treadmill at a constant speed, which had previously been classified as a “somewhat hard” exercise. Drinks containing the substances were consumed 40 minutes (250 ml) and five minutes (125 ml) before exercise and after 20 minutes of running (125 ml).

A shooting test that tested cognitive ability was also part of the investigation. This involved assessment before loading and intake, after half intake, and after loading and full intake. The subjects’ perceived exertion was assessed at ten-minute intervals during exercise.

All three substances improved the speed of information processing after exercise, but only caffeine and guarana were able to reduce perceived exertion. This finding is interesting in that decision-making processes are critical to the practice of many sports.

Please note: Anyone who regularly takes medication should always discuss caffeine consumption with the doctor treating them. This also applies to people suffering from heart problems, hyperthyroidism, cirrhosis of the liver or anxiety,

This is because caffeine interacts with various medications. For example, it can enhance the effect of painkillers containing the active ingredients acetylsalicylic acid and paracetamol. One possibility in this case would be to reduce the dose. Drugs that increase heart rate are also increased in effectiveness by caffeine.

It is known that the effect of caffeine on the body is beneficial only up to a certain dose. Also, those who do not take medication or suffer from the above-mentioned diseases should pay attention to their daily coffee consumption. An overdose can cause restlessness, insomnia, headaches or nervousness, and even tremors and heart palpitations. Most adults can consume up to 400 mg of caffeine per day without experiencing problems.

We recommend testing in advance how much caffeine is good for your own body and performance.

Caffeine is generally permitted in sports. For athletes in NCAA-sanctioned events, for example, there are limits on the amounts of caffeine that may be ingested.

Our GEL 40 with guarana

Different carbohydrate sources (maltodextrin of different chain length & fructose) ensure the best possible absorption of the 40g of carbohydrates. Thus, the energy is already available to your body after a short time.

Thanks to the very good tolerance, carbohydrate intakes of up to 120g per hour are possible (with previous “train the well”). The only 60g total weight makes it easier to carry several gels.