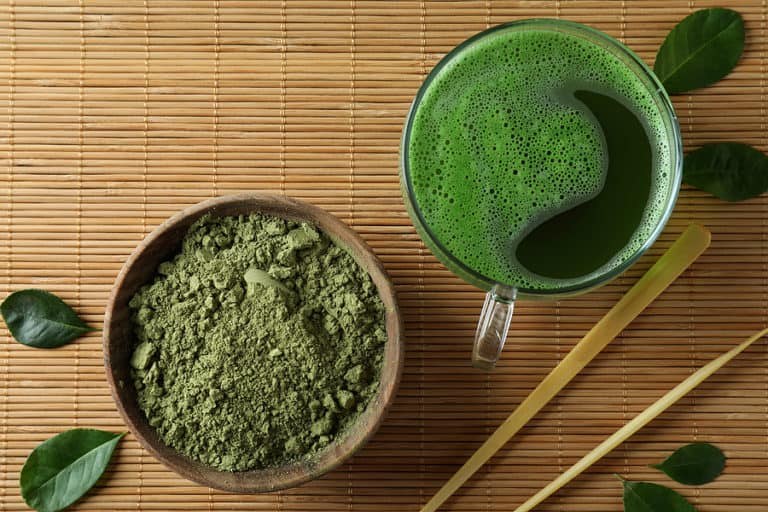 Tea or coffee? There often seems to be only one answer to this question. If you’re more of a tea person, then you’ve come to the right place. However, if you’re a caffeine lover, you’re in good hands here as well as with our article on guarana.

Tea is one of the most consumed beverages in the world. Matcha, a type of powdered green tea, has increased its fame and popularity significantly in recent years. What is the tea from Japan all about?

The word “Matcha” is Japanese and translated means ground tea. Originally, however, the powder tree comes from China. Here, matcha was produced in Buddhist monasteries and was already considered a remedy in traditional Chinese medicine. Meanwhile, matcha is more popular in Japan.

The process of making matcha is complex: The tea powder is extracted from the leaves of the tea plant, which is grown under certain conditions with about 90% shade. Compared to classic green tea, matcha is consumed as a powder made from whole leaves. The powder is dissolved in water for this purpose. The tea leaf can thus be enjoyed whole and you get to enjoy all the ingredients it contains.

The nutritional values given are per 100 grams.

How healthy matcha is for athletes

Why is green tea, especially matcha, considered beneficial to health and what are the benefits of tea? Many different studies have found that there are particularly many antioxidant and anti-inflammatory substances in matcha.

Particularly noteworthy are the so-called catechinswhich belong to the group of polyphenols include. Polyphenols, in turn, are considered to be exceptionally powerful antioxidants, with effects comparable to those of vitamins.

Scientists at the University of Colorado have found that the concentration of epigallocatechin gallate (EGCG) in matcha is 137 times higher than in a bag tea.

Catechins extracted from tea show excellent antioxidant activity, as they have the ability to neutralize free radicals. The imbalance between oxidants and antioxidants can cause oxidative stress, which in turn leads to cellular damage. Catechins fight bacteria, fungi and viruses, thus strengthening the immune system.

Phenolic compounds such as catechins occur naturally in the leaves of Camellia sinensis before. Matcha is obtained from the leaves of this type of tea and can therefore be called a main source of catechins in the daily diet.

There are other substances in this green tea that show a similar effect:

Other positive effects for athletes

However, the catechins contained in matcha are not only interesting because of their antioxidant effect:

There are further studies, although not yet fully completed, according to which the catechins in matcha tea can support, among other things, cancer therapy as well as prevention. The EGCG catechins contained in matcha are also said to benefit the heart and circulatory system, minimizing the risk of stroke and preventing osteoporosis.

Another ingredient of matcha is L-theanine. The amino acid is often found in tea and mushrooms. Amino acids can form proteins that are crucial for the production of insulin, adrenaline and neurotransmitters. They also support cell regeneration and help build muscle mass.

A study published in the American Journal of Clinical Nutrition shows how matcha tea improves attention and helps people focus better on tasks. In this study, subjects who drank two or three cups of green tea within an hour and a half performed better on a learning exercise than subjects who were treated with a placebo drink.

As numerous American and Australian studies have shown, L-theanine in combination with caffeine – both contained in matcha as described – also has a positive effect on cognitive functions, concentration and mood.

L-theanine partially mitigates the stimulating effects of caffeine and lowers blood pressure. As a result – again, studies conducted by the University of Newcastle have proven – after drinking a cup of matcha we feel more energetic, but also less nervous.

Matcha tea in our gel

Different carbohydrate sources (maltodextrin of different chain length & fructose) ensure the best possible absorption of the 40g of carbohydrates. Thus, the energy is already available to your body after a short time.

Thanks to the very good tolerance, carbohydrate intakes of up to 120g per hour are possible (with previous “train the well”). The only 60g total weight makes it easier to carry several gels.